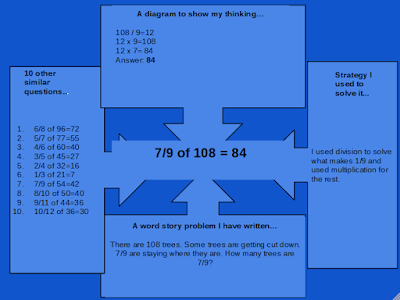 Every think board that our teacher gives us, really gives us a boost in our presentation for the week. I have got a boost for my presentation and I think that it may still be a little hard.
Posted by Talita at 14:37 2 comments:

In week two we used a lot of algorithms and I was challenge. This post was very late but I still remember how I struggled with this presentation. I am fine with working with a algorithm but I did struggle. Here is an example for a problem and solution:

532
x 23
1596
10640
12236
I have learnt that if the bottom number has a number in the tens unit, it will always start with a zero. Just like the zero made bold. I think that the presentations after week 2 were much better with the solving.

WALT: Write a narrative that has detail explaining the the basics things needed in a good narrative.

For the first time in the twins life, they were late and this was dreadful. “What a bummer” said Mrs Thompson staring at Riley and Scarlett who were never late. Riley was quite tall for her age. Riley flicked her brown hair to one side and sighed. She turned her head to Theo who was sitting next to the twins who was also late. She shook her head and gave him an invitation to detention. Late comers always go to lunchtime detention in Room 3. Since the twins didn’t like Theo, they all had to sit next to each other during detention. 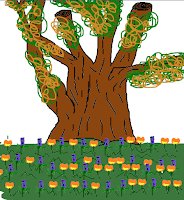 “We should probably get on with the show” their teacher told the class. Already on the chalkboard was written neatly what's happening that day and everyone’s name for individual class points. Their teacher wrote on the board the word ‘assignment’. Underneath she wrote that this assignment included a field trip. Nobody said anything but everyone was celebrating silently to themselves. Mrs Thompson turned from the chalkboard and the class stopped celebrating. “This assignment will be about biodiversity, it’s problems and how we can improve it” spoke Mrs Thompson. “We will be going with other classes”, she added.
The classes were very loud and noisy but Scarlett sat in the long black back seat of the bus. She focused her attention on a piece of paper that was filled with her teachers handwriting. Scarlett took a step out of the bus and had a good stare at the bus. Riley was standing right next to her. “What are you looking at?”, Riley asked. Scarlett faced her sister and moved her eyebrows towards the bus. “Ok, but I mean why?” Riley stopped talking. In the corner of her eye there was a beam of light coming down from the sun towards one of the buses. 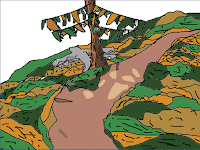 Theo was calling out for help because everything that was surrounding him was frozen. He heard an astonishing powerful voice which sounded like the smartie pants, Riley.  The boy walked slowly to where Riley and Scarlett stood. “What is this and why is it happening?”, Theo spoke with a demanding tone. “I don’t know” Riley spoke to his face, “but we have to save the city and whoever else that is having this weird issue”. The three kids walked home to grab their bikes and met at the park at ten o’clock sharp.

As they headed into the woods again, they noticed track marks on the ground and broken twigs beside the marks. Then a high pitched scraping noise came from afar. Suddenly, right in front of their eyes, they saw what appeared to be a roof jutting about a foot out of the ground. They moved around the trees, down a handmade ladder and around to the front of a old wooden shack like hut. The three looked at each other and Scarlett stepped forward and knocked on the door. They could hear footsteps approaching and the door creaked open. To their surprise a grey haired old man stepped out of the hut. He invited them inside for a hot coco.

“I froze time to find my sweet, lovely granddaughter” he explain to them. “Who is she?” they all screamed. “Mrs Thompson”, he said with an uncertain tone. The three were very surprised. They told this old man that Mrs Thompson was their teacher. “I needed to see her!” he cried. Everyone put hands on him and Scarlett said, “you didn’t need to freeze time you just needed to get out of this hut and go to her”. The old man turned to the three and spoke, “you can call me Mr Johnson”. Everybody else told him their names. They brought him outside up the handmade ladder passed a few trees and out of the woods trail.

Everyone was frozen and Mr Johnson was having second thoughts of meeting his granddaughter again. He walked up to her and unfroze time. Then he hugged her, but she didn’t seem to like it. “Who are you?” she asked disgustedly. She stared into his eyes and she regretted asking that question. Mrs Thompson regretted asking because she knew exactly who it was. Mr Johnson nearly took a step back to his hut but before he could the biggest hug ever was made. “I’m sorry”, Mrs Thompson said. The grandfather and granddaughter are still in touch to this day and they couldn’t be more happier.

Talofa lava, my name is Talita and I am a year 8 in Room 3. This year will be my last year at Pt England. It seems sad but then I think about all the things I can achieve in 2017. Last year I was chosen to be a Prefect for this year. My goal for 2017 is to be the best Prefect that I can be.

In the summer I like to play cricket and netball in the Winter. Most Summer holidays, my family and I like to go down to a place called Tairua. There are a bunch of beaches near Tairua which is superb since I love to swim. Thank you for visiting my blog.

Who is visiting this blog?